Rozina Islam, a senior journalist with prominent Bengali newspaper Prothom Alo, was allegedly caught “stealing” information from an office in the health ministry at the country’s secretariat in Dhaka on Monday, according to reports.

Kolkata: A journalist in Bangladesh known for her investigative reports and recent exposes on corruption in matters relating to the Covid crisis in the country, has been sent to jail after being arrested under the Official Secrets Act.

Rozina Islam, a senior journalist with prominent Bengali newspaper Prothom Alo, was allegedly caught “stealing” information from an office in the health ministry at the country’s secretariat in Dhaka on Monday, according to reports.

A Dhaka Metropolitan Police officer was quoted saying she was arrested for alleged theft and photographing of sensitive state documents under the Bangladesh Penal Act and the Official Secrets Act.

The journalist was detained at a room in the health ministry office for 5 hours, and physically and mentally harassed, her sister who later spoke to her was reported to have said.

She fell sick but instead of taking her to hospital, Rozina Islam, who is in her early 40s and had taken a COVID-19 vaccine that morning, was sent to the Shahbagh police station late evening, held there all night and taken to court at 7 am.

The chief metropolitan magistrate dismissed police pleas for her custody for five days and sent her to judicial custody at the Kashimpur Women’s Central jail till Thursday.

The incident brought large numbers of journalists out on the streets of Dhaka on Tuesday and triggered widespread outrage beyond Bangladesh borders. Several global journalists organisations condemned it as an attack on the media in south Asian. 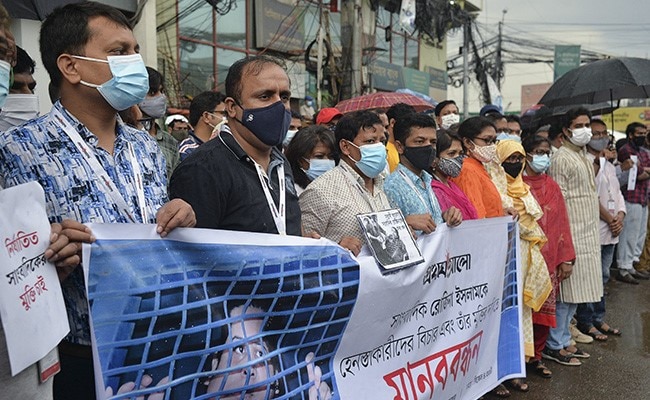 The committee to protect journalists CPJ, the New York based organisation working for the rights of reporters across the globe, demanded the immediate release of Rozina Islam.

The South Asian Women in Media (SAWM), a network of women journalists across South Asia, condemned the detention of Rozina Islam and sought her immediate release.